An internal investigation into a deadly train crash in Southern California, just outside of L.A., has revealed a number of the derailed passenger cars were equipped with defective parts. Specifically, two couplers and a “cow-catcher” broke when the train struck a large pickup truck and trailer that had gotten stuck on the tracks. That’s according to a recent report by the L.A. Times. 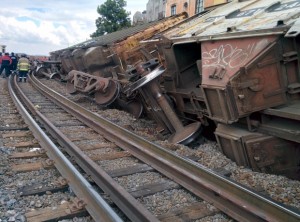 On trains, couplers are supposed to keep the cars together. The cow-catcher is affixed to the front of the train to catch cattle or other objects that may be in the train’s path and keep them from going underneath the train, which could cause it to derail.

The revelation, which came following release of an internal report by the train’s operator, Metrolink, coincides with an ongoing federal investigation into the February crash. Further, it may provide an additional avenue from which injured victims may seek compensation. The train’s engineer, age 62, died a week after the crash as a result of his injuries. A total of 28 passengers were transported to local hospitals with injuries that ranged from minor to critical. Additionally, two other crew members were hurt.

Two of those women filed a lawsuit against the truck driver and his employer, demanding compensation for injuries that included a fractured spine, knee injuries, head injuries and broken ribs. An attorney for the driver, from Arizona, told the news media the truck had accidentally turned onto the tracks and had tried over and over to move, but when he couldn’t and the train approached, he exited the vehicle to save his own life. The lawyer said his client personally had no assets from which plaintiffs could recover even if they won.

Now, we know there could also potentially be claims filed against the manufacturer of the train parts.

According to the report by Metrolink, the cowcatcher  on the cab car (the passenger coach where the engineer is located) failed to meet industry design specifications with regard to how much force it should have been able to withstand. Meanwhile failure of the couplers resulted in several cars striking one another and derailing. There is evidence the couplers were manufactured in such a way that they might have been weakened.

A key question for those who may file future injury lawsuits against the parts manufacturer is whether these product liability issues in any way contributed to the crash or contributed to the severity. That’s a question that is currently being assessed by the National Transportation Safety Board. This is the agency that will ultimately ascertain the probable cause of the crash and then, based on those findings, make safety recommendations. But these investigations are known to be lengthy, and it could be many more months before conclusions are reached.

A spokesperson for the manufacturer has denied there was any defect or that its parts had anything to do with the collision and subsequent injuries. Still, they said they are cooperating with federal investigators.

It’s unclear how these allegedly defective parts were allowed in service, when both the manufacturers and the railroad companies use a number of quality control measures to test and inspect for possible defects.