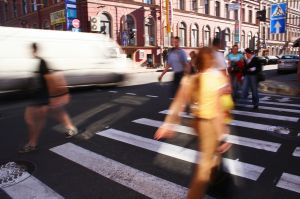 The new report by Transportation for America found the top five most dangerous metro areas in the nation are Orlando, Tampa, Miami-Fort Lauderdale, Jacksonville and Memphis.

However, when looking at all areas of a state, Punta Gorda was the most dangerous area in Florida for pedestrian accidents. Followed by Vero Beach, Ocala, Panama City and Orlando.

The Cape Coral and Fort Myers area was the state’s ninth most dangerous, with a reported 32 fatal pedestrian accidents in 2007-2008. Naples-Marco Island placed 17th, with a reported 12 fatalities.

The study recommends a number of improvement methods, including:

-Traffic calming and street design: Including signals that give pedestrians a head start in crossing the road. Such planning, when combined with speed-reduction measures, can reduce accidents by up to 70 percent.

-Complete Streets: Planning for upgrades and future road projects need to take into account the needs of all users, including bicyclists and pedestrians. The needs of various age groups and persons with disabilities also should be taken into account.

-Safe Routes to School Program: These programs take a comprehensive approach to student safety, whether walking, riding a bike, waiting at the bus stop or on the bus.

-Walkable Neighborhoods: Communities need to be designed with plenty of emphasis on walking and bicycling, including parks and public spaces, restaurants and nearby retail facilities.