Everything can be regulated by parental control these days, but not pedestrian accidents in Fort Myers and elsewhere. A recent public service announcement released on the “See Blindspots” website is a little too offensive, says Florida State Senator Mike Fasano.

The video’s complaint center has received a number of concerning opinions stating that the video is too graphic. This content shows the real-life accidents that we see on Florida roadways every day. Fasano says these videos shouldn’t be visible to young viewers. 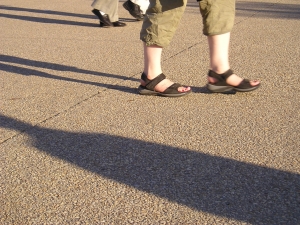 The “See the Blindspots” safety program was launched to help raise awareness about the dangers that pedestrians face all over the state of Florida and to urge drivers to navigate with more consideration for our on-foot travelers, according to Digital Journal.

Our Fort Myers pedestrian accident attorneys understand how prevalent pedestrian accidents are on our roadways. Florida has been named numerous times as the most dangerous state in the U.S. for these types of accidents. Florida State Representative Irv Slosberg supports this website and the message it accompanies to the fullest. Slosberg previously lost his daughter in a similar accident.

Rep. Slosberg says that there’s nothing wrong with the violent nature of this video because of how big of a problem it is on our state’s roadways. He says that he feels that this video is warranted because of the nature of the problem. Pedestrian and vehicle accidents in the state are alarmingly common and the public needs to know about it.

Florida saw nearly 500 pedestrian fatalities in 2009. These accidents placed the state as the number one deadliest state for pedestrian accidents, followed by Texas and Georgia, with less than Florida’s number and with significantly lower numbers since then.

“We’re going backwards instead of forwards. A lot of it has to do with driver distraction: cell phones, texting and driving,” says Rep. Slosberg.

Senator Fasano says families and Florida residents shouldn’t be forced to relive the pain and agony of their loss as illustrated in the video. No records of anyone, including students or drivers, have been found required to video to be watched.

Florida has continued to be named, year after year, as the most dangerous state in the country for fatal pedestrian accidents. According to First Coast News, nearly 10 pedestrians die and more than 20 are injured every week in our state.

Florida holds the top four slots for most dangerous metropolitan areas for pedestrian accidents in the entire country. From 2000 to 2009, there were nearly 5,200 pedestrian fatalities in our state. These accidents cost Florida more have $22 billion, according to Transportation for America.

“We need something graphic on air. A powerful message is needed to make an impact,” said Slosberg
Associates and Bruce L. Scheiner, Attorneys for the Injured, is a dedicated law firm helping accident victims throughout South Florida. If you have been injured in an accident, call us today for a free and confidential consultation to discuss your case. 1-800-283-2900.