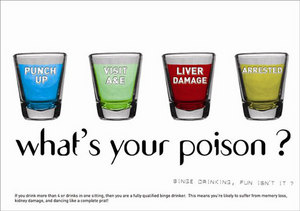 A newly-released study conducted by the Centers for Disease Control and Prevention, (CDC), has found some alarming statistics involving binge drinking and alcohol-related motor vehicle accidents.

The study is thought to be the first to attempt to measure the likelihood that a person will drive after binge drinking. The result is hoped to be an increased effort to stop bars and restaurants from serving people after they are intoxicated, according to the report’s authors. Binge drinking is defined as a person who consumes 5 or more drinks on a single occasion. The study focused on 14,000 binge drinkers, and about 12% of those surveyed said they had driven within 2 hours of their last bout of heavy drinking. Of those drivers, more than half said they got behind the wheel after drinking at a bar, restaurant or other establishment licensed to sell alcohol. Half of the drivers who left the establishment reported they had 7 or more drinks, and 25% said they’d had at least 10.

James Fell, of the Pacific Institute for Research and Evaluation, a national research organization that is focused on alcohol policy, notes “almost everybody’s going to be intoxicated after 10 drinks”. Binge drinking is a main factor in the more than 11,000 deaths that occur annually from alcohol-related motor vehicle crashes, according to the CDC. The study’s lead author, Dr. Timothy Naimi of the CDC, said the hope is that state legislators will take a harder look at laws that supposedly prevent commercial establishments from selling alcohol to drunken patrons. While there are existing laws on the books, Naimi said most states don’t have enough enforcement personnel to stop in on bars and watch for the over-serving of customers. “These are some of the most disregarded laws in the country,” he states.

Without people policing the laws, there is little incentive for bars, clubs and restaurants to actually discourage drinking. Jim Mosher, a Washington, D.C-based legal researcher and consultant on alcohol issues, notes that “servers and bartender’s tips depend on keeping patrons happy and buying (drinks)”, implying that most bars and restaurants do little to self-police patrons who are intoxicated.

According to national surveys, statistics regarding binge drinking include:

While the numbers of drunken driving fatalities has decreased about 10% from 2007 to 2008, most of the efforts to reduce drunk driving are centered on punishing the driver, rather than focusing on preventing drunken driving at the source of those who enable it.

“Establishments that serve alcohol have a serious responsibility in not over-serving their patrons”, says Florida personal injury attorney P.J. Scheiner, of Associates and Bruce L. Scheiner Personal Injury Lawyers, P.A. “Until they step up their efforts to curb the practice, binge drinking will continue to be a major cause of drunk driving accidents.”

If you or a loved one has been the victim of a drunk driving accident, Associates and Bruce L. Scheiner Personal Injury Lawyers want you to know that you do have legal recourse. With almost 40 years of suing drunk drivers on behalf of their clients, the firm is prepared to aggressively stand up for you in an effort to help you attain the financial compensation you deserve. Contact us at 1-800-DIAL-BLS, or log onto www.dialbls.com to learn how we can help.