WINK News is among the media outlets reporting that the grace period for Florida’s texting-while driving law has ended and motorists can expect to be stopped and ticketed for texting behind the wheel as the new year gets underway.

The new law applies to drivers texting on a phone while the car is in motion. Motorists texting while stopped at a red light will not be at fault under the new law. It’s also still permissible to use a phone’s GPS while the vehicle is in motion, though it’s recommended to type in your destination before you start driving. 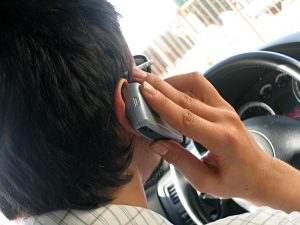 There was a six-month warning period after the law went into effect in July. After Jan.1, police will begin to issue tickets to law breakers.

Our car accident attorneys in Fort Myers and Cape Coral urge motorists to forgo all forms of electronic communication while driving, not just text messaging.

Florida was among the last states in the nation to switch from a secondary enforcement law, which required drivers to be stopped for committing another moving violation before an officer could issue a texting ticket, to primary enforcement.

Still, many safety advocates argue the new law does not go far enough, as it still permits drivers to use hand-held phones to talk or to utilize GPS and other functions.

While technically, drivers can still hold a phone in their hands to talk on the phone, it’s not recommended. Those who are cited can show proof of purchase of a wireless device at the county Clerk of Court’s office to mitigate the penalties. The penalty for first-time violators is $30 plus court costs, which could add up to more than $100.

The new law also makes school zones and work zones hands-free areas. Those caught breaking the law in these zones face a $60 fine, court costs and three points added to their driver’s license.

Our injury lawyers in Fort Myers and Cape Coral continue to see far too many traffic “accidents” caused by distracted drivers. A thorough and independent review of the facts and circumstances of a collision, which we conduct in each case we represent, will often turn up text messages, social media activity or other evidence that a driver was distracted at the time of, or shortly before, a motor-vehicle collision.

Accordingly, we encourage you to obey the spirit of the law, rather than to adhere to the letter of the law. All forms of electronic distraction, including use of in-car infotainment systems, distract a driver from the primary responsibility of operating a motor vehicle in a safe and effective manner. When a serious or fatal collision results, the at-fault driver can and should be held responsible for all resulting damages.