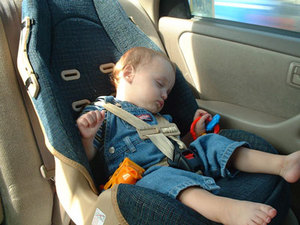 Now that Florida has enacted a law that makes not wearing a seatbelt for adults a primary traffic offense, a Florida Senator is pushing for similar legislation regarding booster seats for children in cars. If he is successful, not having children of a certain age secured in a booster seat, just as with an adult driver and their seat belt, will become reason enough for law enforcement to pull a driver over and issue a citation.

Sen. Thad Altman, R-Melbourne, has filed a bill that would require children be secured by a booster seat harness. This is the fourth consecutive year he has pushed for the new law. The law came before former Governor Jeb Bush back in 2002, and was vetoed, with Bush referring to concerns over intrusiveness of government into family affairs. At that time, very few states had enacted similar legislation. Today, however, Florida, along with Arizona and South Dakota, are the only three states without such a law in place. Altman is vowing to hold his ground, continue fighting and see to it that his fellow lawmakers pass his bill, and saves young lives in the process.

Currently, Florida statutes require a child be in a child safety seat if they are 3 years old or younger. After age 3, with the absence of the booster seat law, children are supposed to use a seat belt, as are adult vehicle occupants. The problem is that many experts are concerned that standard seat belts can actually cause serious injury to a child, due to their height and weight. A properly designed and installed booster seat raises the child’s vertical position in the car, reducing the risk of injury that can come from them using a standard seat belt.

Groups like The American Medical Association and the southern chapter of the American Automobile Association, (AAA South), point to studies and statistics that show children between ages 4 to 7 can be seriously injured or even killed when wearing a standard seat belt during a crash. Children in that age group are seated too low when buckled in, and injuries to the neck, spine, abdomen and lower extremities are more prevalent than in children who were in a booster seat.

Automobile accidents are the leading cause of death for children in the United States, according to government and insurance-industry studies. 35 child passengers younger than 10 died in Florida crashes in 2008. An additional 7,754 were injured.

“As far back as 2006, the U.S. Transportation Secretary has been chiding states like Florida to pass this law, because he knows that only 1 in 5 kids who need to use a booster seat are actually using them”, says P.J. Scheiner, a legal expert on motor vehicle crash injuries with Associates and Bruce L. Scheiner Personal Injury Lawyers, P.A. “The time for excuses is over – this law would be a huge step toward reducing the number of serious child injuries and fatalities on Florida’s roads.”

Since 1971 the firm of Associates and Bruce L. Scheiner, Personal Injury Lawyers has been passionately fighting for justice on behalf of those injured or killed in car, motorcycle and truck crashes. Our history of successful case resolution and more information about your legal rights can be found at www.focusedonjustice.com, or by calling 1-800-Dial-BLS.