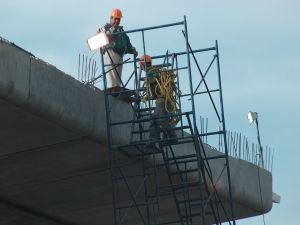 Falls are the number one cause of injury at construction sites, according to the United States Department of Labor, which has released statistics for 2007, the most recent year for which data is available.

In Florida, transportation-related deaths, workplace assaults and homicide also top the list of workplace deaths in 2007.

Construction accident attorneys and Florida injury lawyers urge construction workers to utilize safe practices on the job and to use extra caution when working with heights. Despite the economic slowdown, Southwest Florida remains home to a large number of heavy construction sites.

Annually, falls account for one in every three construction-related deaths, according the the Bureau of Labor Statistics. There were at least 442 construction worker fatalities during 2007 as a result of falls.

Statewide, Florida’s 362 work-related deaths put it with 18 other states that saw an increase in deaths in 2007.

Working seniors
-Those over 65 had the highest rate of death on the job, with almost 10 deaths per 100,000 workers.