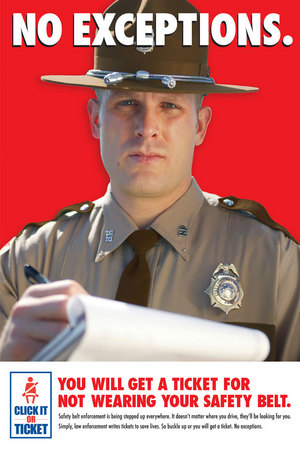 Drivers in Florida are now subject to a citation for not being buckled in by their seat belts – and law enforcement officers can now pull a driver over for that specific reason alone. The fine is higher if a minor under the age of 18 is not correctly restrained within the vehicle. Additional county fines and penalties are also applicable.

Florida Governor Charlie Crist signed the new law into effect in an effort to keep motorists safe, and reduce the injuries and deaths caused by motor vehicle crashes in the sunshine state. Crist noted, “The most important function of government is to protect – this law will save lives.” With that said, he signed into law the Dori Slosberg and Katie Marchetti Safety Belt Law named in memory of two Florida teens that were involved in separate traffic accidents, and died as a result of not wearing their seat belts. The Florida Highway Patrol predicts that at least 124 individuals will be saved each year as a result of the state’s new seat belt law.

Statewide seat belt usage in 2008 was 79.1%, making it 35th in the nation and below the national average of 83%, according to the National Highway Traffic Safety Administration. According to the Florida Department of Highway Safety and Motor Vehicles, there is an average of just over 700 motor vehicle accidents on Florida roadways every day. In 2008, 2,983 people lost their lives in motor vehicle accidents in Florida, and 199,658 people suffered some type of injury. Florida’s Department of Motor Vehicles, (DMV), also notes that in 2004, Florida experienced 2,179 traffic deaths of drivers and passengers in Seat Belt Equipped Vehicles (SBEV). The tragic note of this is that 62.1% (1,353) of the people killed were not wearing seat belts. Additionally, 69% (109 of 159) of the children ages 0 to 17 years old killed were not using safety equipment. These startling statistics make it clear that the odds are high that you or someone you know will be involved in some type of auto crash at some point in your lifetime.

Florida personal injury lawyers are encouraged by the new, tougher “Click It or Ticket” law enforcement, recognizing that the bill was long overdue. “The simple act of buckling up yourself and your passengers has a huge impact on reducing fatalities and injuries caused by the alarming number of auto crashes on our roads”, says PJ Scheiner, of Associates and Bruce L. Scheiner Personal Injury Lawyers. “It is our hope that this new law will make motorists more aware of the importance of using seat belts whenever they get behind the wheel.”

Florida is the 28th state to enact such a law, referred to as a “primary seat belt law”, which means drivers may be pulled over and cited solely for that infraction. Previously, another infraction would need to take place prior to a driver being cited for a seat belt violation.

If you or a loved one has been the victim of a serious injury or fatality caused by a car crash, contact the Florida personal injury lawyers today to learn more about how we will fight for your legal rights, and stand by your side during what can be a traumatic life event.