While 90 percent of all auto accidents are caused by human mistakes, 1 in 10 are caused by some other factor, including poor road conditions. That could include some dangers posed by inclement weather, but primarily, we’re talking about conditions of the actual road or traffic engineering that make it unsafe. 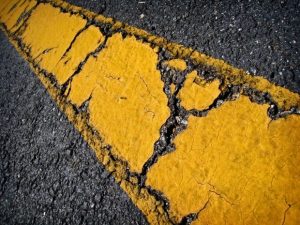 All these elements are the responsibility of city, county or state governments to maintain. A 2009 study commissioned by the Transportation Construction Coalition revealed that over the course of 18 months,  poor highway design and conditions are a factor (if not the cause) of about half of all fatal traffic accidents in the U.S. Study authors opined bad highway design played a role in more motor vehicle deaths than speeding, failure to wear a seat belt and alcohol use.

How do we address this widespread issue? And how do we obtain justice for those affected?

As far as remedy, the Transportation Construction Coalition recommended:

Those who study the issue say much of the problem has to do with older roads/ poor maintenance as much as roads that were poorly designed. Much of the problem exists on back roads. Highways tend to be newer and better cared for. But that only accounts for 45,000 miles of the 3.9 million miles of road in the U.S.

That means in most cases where poor road conditions exist and factor in a crash, the liable entity is going to be a local government. And that brings us to the next issue of accountability. Victims of Fort Myers a car accidents who are injured as a result of the government’s failure to keep the road safe may be able to file a car accident claim and lawsuit against that agency. Bear in mind, though, that these claims can be more challenging than a typical car accident lawsuit.

Typically the first obstacle – and the reason many of these cases never see the light of day – is that the victim doesn’t realize that poor road conditions were a factor. This is especially true when there may have been multiple factors at issue. That’s why it’s so important to have an experienced accident lawyer review the case.

In order to prevail in such a claim, the American Bar Association indicates the following elements must be proven:

If you have been injured in a Fort Myers auto accident, we will work to help you recover all the damages to which you are entitled.