Florida’s Department of Highway Safety and Motor Vehicles Executive Director Julie Jones has announced that motorcyclist and passenger deaths declined between 2009 and 2010 by 4.7 percent. This information is contained in the 2010 Florida Traffic Crash Statistics Report, released in August. 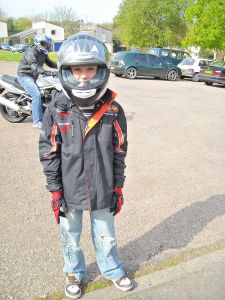 Other motorcycle statistics in the report include: the number of crashes from 2009 to 2010 declined by almost 10 percent; motorcycle operator injuries dropped by 10 percent; and motorcycle passengers injured fell by almost 5.5 percent.

-Motorcycle passengers should be able to reach the footrests.

-Passengers should be old enough to understand how to ride safely.

-Protective gear including a helmet and appropriate footwear should be worn by the passenger.

-Passengers should be reminded to do the following: hold on to the hand-holds or the operator’s hips or waist; keep feet on the foot rests at all times; ensure feet and hands are clear of moving parts and extremely hot parts such as the exhaust pipe. Also, when entering a corner, make sure you are looking over the operator’s shoulder toward the direction of the corner. Never make sudden movements that could distract the operator. And when riding over an obstacle like railroad tracks, bend your knees slightly while standing on the footrest to let your legs act as shock absorbers.

-Passengers need to think of themselves as a second operator and be accountable for a safe riding experience.

Please keep these thoughts in mind if you plan on having a passenger on your motorcycle:

-Your passenger should actively participate during the ride acting as a second pair of eyes for the operator.

-A passenger will add extra weight to the motorcycle, thus changing its maneuverability.

-Be aware that a sudden stop could cause your passenger’s helmet to hit yours.

-Using the throttle and clutch will be different when stopping and starting with the extra weight on the bike.

-Braking is greatly impacted by a passenger, using more pressure will be required as well as adjusting your braking time. Having extra weight over the rear tire also makes for a downgrade to a stop longer.

-Cornering gets tricky because the extra weight has an effect on cornering clearance.

-Extra time will be required for passing.

-Your passenger will have a significant impact on side wind.

If you or a loved one has been injured in a motorcycle accident in South Florida, contact Associates and Bruce L. Scheiner, Attorneys for the Injured, today for a free and confidential consultation to discuss your case. 1-800-283-2900.

Advocates Team Up to Raise Awareness of Motorcycle Accidents in Fort Myers and Elsewhere, Florida Injury Lawyer Blog, May 1, 2011.