According to a recent government study, bicyclists aren’t normally at fault in traffic accidents. Very few injuries of bicyclists are caused by riders running red lights or neglecting to wear helmets. 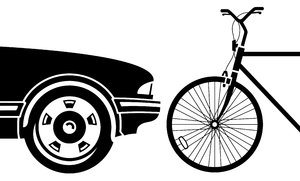 Our Fort Myers bicycle accident lawyers understand that these findings go against the opinions of many, who continue to blame careless riders for accidents. They’re oftentimes blamed for not paying attention or breaking road laws. Well, we’re here to debunk that theory — and the numbers support us!

According to The Guardian, only in 2 percent of examined accidents was the rider at fault. Of the accidents that were blamed on the bicyclists, about 3 percent of them were caused because they were wearing dark clothing. Neglecting traffic lights by bicyclists was only the cause of about 2 percent of crashes.

These figures were a little bit higher when taking into account the accidents in which the bicyclists was killed. But in such cases, it’s only the driver’s account that’s available.

The accident information was reviewed by the Transport Research Laboratory (TRL). These researchers found that about a quarter of the cyclists fatalities happened when a vehicle rear-ended the cyclist. These kinds of accidents were more common in rural areas.

When looking at bicycle accidents involving children, their behavior became more of an issue. They were more likely to do something “wrong” on the bike to help to cause the accident. This wasn’t the case with adult riders. With adult bicyclists, the driver of the vehicle involved was at fault about 75 percent of the time. Riders were only at fault in about 20 percent of these accidents.

The cyclists’ lobby group CTC says that the report shows that the government should be focusing more on driver behavior and less on cyclist behavior. The TRL also released a report saying that the helmet law isn’t that important when factoring causes of injuries — helmets only save about 10 or 15 lives a year.

“The main cause of crashes seems to be ‘failed to look properly’, whereas very few cyclists are injured or killed acting illegally, such as failing to use lights at night or disobeying traffic signals,” said Chris Peck, from CTC
With this report from England, and with the history of bicycle accidents in the state of Florida, it’s critical that we help to reduce the risks of these accidents. Florida continues to rank as the top stop for bicycle fatalities in the nation. Lee County is ranked among one of the state’s most dangerous counties.

With the tourist and heavy travel season here, we’re asking drivers to be on the lookout. Pedestrians and bicyclists will be lining our roadways — and they have rights, too! Take the extra second to look for these vulnerable travelers along our roadways before making a move in traffic. Keep your hands on the wheel and your eyes on the road to help save lives!

If you or someone you love has been injured in a bicycle accident, contact Associates and Bruce L. Scheiner, Attorneys for the Injured, today for a free and confidential appointment to discuss your case. Call 1-800-Dial-BLS.