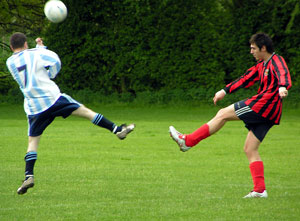 The popularity of organized sports involving young children and teens creates a real danger of sustaining a serious injury for athletes in Florida and throughout the country. From the peewee and Pop Warner leagues up through high school and on college campuses, millions of young sports enthusiasts are injured each year, and they may not even occur during an actual game – more than half of them happen at practice and in training.

Injuries can occur in almost every sporting activity or training session, including golf, soccer, baseball, football, rugby, basketball and several other games. The most serious injuries occur in sports where collisions are a part of the game, but things like torn ligaments and lower back injuries can happen in less strenuous sports, such as golf. Athletes are injured in instances where they don’t warm up or adequately stretch prior to engaging in sports activities, and many happen due to improper or sub-standard safety gear or equipment. Many injuries happen when a player is not in adequate condition to undertake a particular sport, or has not received proper training or conditioning. It is the responsibility of an organization’s coaching staff, team physicians and athletic trainers to ensure that each participant is adequately prepared to play, and to closely monitor the player should an injury occur, Oftentimes, a decision to allow a team member to continue to play after suffering an injury can lead to disastrous results, further aggravating the injury or in some cases, even causing death.

There are several examples of how a sports injury can occur. It may involve product liability, where a child suffers serious injury due to a defective football helmet design.
If a child suffers a severe neck injury when an untrained referee fails to recognize the seriousness of a wrestling hold, there may be the basis for a negligent supervision lawsuit. Even a premise liability lawsuit may be called for if a child breaks a bone in a fall caused by negligent field or clubhouse design or maintenance.

“In Florida, sports, particularly football, is almost like a religion to players, coaches and parents of players,” notes Bruce L. Scheiner, Senior Attorney and Founder of Associates and Bruce L. Scheiner Personal Injury Lawyers, P.A. “We see serious injuries to participants of all ages which may have been preventable had the proper training and safeguards been in place. Sports-related injuries can be devastating to a family, changing their lives forever.”

For school-aged children, most parents sign forms releasing schools from any liability when their child incurs a sports injury while playing a school sport. There can, however, be exceptions to this. Former Lely High School football standout Ereck Plancher, then a 19-year-old freshman wide receiver, collapsed on a University of Central Florida practice field during a March 18, 2008 off-season conditioning workout. He was taken to a hospital, and died about an hour later. An autopsy found that Plancher died from complications due to physical stress, which triggered a sickle cell trait believed to have caused his body to shut down. In people who carry the trait, red blood cells can be malformed, or become sickle-shaped, and stop carrying oxygen to the organs.

According to a report in the Orlando Sentinal, many of the interviews and depositions made public since Plancher’s death have hinged on whether coaches and athletic staff knew Plancher carried the sickle cell trait, and whether Plancher had been informed of that fact before hitting the practice field. Attorneys representing the family have argued that the waiver did not absolve the coaching staff of its responsibility to properly care for Plancher. Referring to the waiver Plancher signed in order to play ball for UCF, Orange County Circuit Court Judge Maura Smith wrote on December 23rd, 2009, “Summary judgment on the affirmative defense of release is denied since the court cannot conclude the release and its language is unequivocal and unambiguous,”

In 2005, a La Salle University (Pennsylvania) football player suffered a concussion while at football practice. A lawsuit filed by Preston Plevretes, now 23, claimed that La Salle medical staff improperly treated him after he sustained the concussion. Despite having continuing symptoms, the lawsuit said, Plevretes was cleared to play in a subsequent game in which a tackle caused brain damage that has left him with speech impediments, memory loss and other issues that require 24-hour care. In November 2009, La Salle University agreed to pay $7.5 million to settle the lawsuit brought by a severely injured player.

According to the National Center for Sports Safety, there are some eye-opening statistics regarding sports-related injuries:

• More than 3.5 million children ages 14 and under receive medical treatment for sports injuries each year.

• Injuries associated with participation in sports and recreational activities account for 21 percent of all traumatic brain injuries among children in the United States.

• Overuse injury, which occurs over time from repeated motion, is responsible for nearly half of all sports injuries to middle-and high-school students. Immature bones, insufficient rest after an injury and poor training or conditioning contribute to overuse injuries among children.

• Most organized sports related injuries (62 percent) occur during practices rather than games. Despite this fact, a third of parents often do not take the same safety precautions during their child’s practices as they would for a game.

“Please review the Safety Checklist: For the Parent on the National Center for Sports Safety website to find out how you can make sports safer for your children,” recommends Bruce Scheiner. “Remember – Safety is No Accident.”

If you have suffered a serious injury while engaging in a sporting activity, our expert team of attorneys can aggressively represent your legal rights, and help you get the financial compensation to which you may be entitled. We are available 24-hours a day, 7 days a week, and will meet with you for a no-obligation case evaluation in one of our 7 area offices, at your home or even in the hospital. And, you pay us no fees or costs unless we win. Contact us at 1-800-Dial-BLS or visit our website www.focusedonjustice.com