A bicycle injury verdict handed down by a Florida trial court has been reversed on appeal after it was determined failure to warn – the key argument in the product liability claim – was not the proximate cause of plaintiff’s injuries. 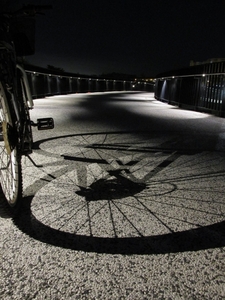 The case of Trek Bicycle Corp. v. Miguelez before the Third District Court of Appeal was not a typical bicycle injury claim in that the defendant was not a motor vehicle driver, but rather the manufacturer of the bike itself.

According to court records, plaintiff was riding his new road bicycle on the shoulder of a major causeway when the bicycle stopped abruptly. The rider fell onto the pavement below, sustaining serious injury to his shoulder, jaw and face.

Upon closer inspection of the bicycle, it was revealed an object had gotten lodged in the spinning spoke of the front wheel. The object then struck the back side of the front carbon fiber forks, which in turn made the wheel suddenly stop spinning. The front forks were hit with enough force to crack, and the bicycle collapsed. The rider sustained his injuries when he fell forward over the handlebars.

Plaintiff sued the manufacturer of the bicycle, as well as the retailer from whom he had recently purchased the bicycle. He asserted numerous product liability claims, specifically defective design, defective manufacture and failure to warn.

The bicycle manufacture was successful at trial in securing directed verdicts on the issues of defective design and defective manufacture. The judge denied a motion for the same on the failure to warn claim.

As it pertains to this claim, plaintiff had argued that if a warning sticker had been on the bike, he never would have purchased the bike. The warning indicated damaged carbon fiber can fail suddenly, which could result in serious injury or death. The warning indicated that if the bicycle was impacted or crashed, the rider should stop riding right away and take it to a dealer for inspection.

Defendant argued the sticker was on the bicycle. Plaintiff argued it was not.

In weighing this single claim, jurors sided with plaintiff, ultimately awarding him $800,000 for his injuries.

Appellate court reversed. Even assuming the warning was not on the bicycle, the court found failure to warn was not the proximate cause of plaintiff’s injuries. That’s because damaged carbon fiber failing suddenly wasn’t the cause of injury in this case, the court ruled. Rather, it was road debris getting caught in the front spoke, causing the wheel to stop suddenly. This had nothing to do with carbon components or lack of warnings, the court ruled, but rather the conditions of the road.

This is not to say cyclists should not explore the possibility of litigation against bicycle manufacturers in such instances. However, the legal arguments must be carefully developed.