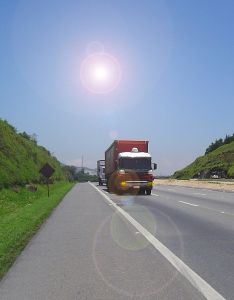 But that only compounded the bigger problem which was that, for reasons unknown, the trailer became unhooked from the truck in the middle of the highway. That was around 6 a.m. The trailer was blocking the road, but drivers approaching the hazard in the fog only had seconds to react.

Unfortunately, seconds were not enough for several of the drivers, and several crashes resulted, claiming the lives of four people and seriously injuring several others.

The first vehicle was a Ford Focus, whose driver attempted to swerve to avoid the trailer, but still hit the back corner. Then a large pickup truck slammed into the rig’s other rear corner. Seconds later, another tractor-trailer came up fast, striking the Focus and launching both into a nearby swamp. The 39-year-old driver of the Focus and her three teen passengers, all between the ages of 14 and 17, were killed. Another passenger in that vehicle survived, but was left in serious condition.

The driver of the pickup was not injured, but the 55-year-old driver of the oncoming truck suffered injuries and was transported to a nearby hospital.

To give you an idea of severity of impact: The detached trailer left pockmarks in the asphalt that were so severe, new asphalt had to be put down before the road could be re-opened.

Now, investigators with the Florida Highway Patrol are examining how the detachment occurred. It’s possible charges could be filed, depending on the outcome of the investigation.

As is common within the trucking industry, the 23-year-old driver of the first truck was an independent contractor. He reportedly set out on the road just a few minutes before the truck became detached. He reportedly continued to drive for a distance before realizing the tractor was detached, though he did ultimately turn around and return to the scene.

Investigators will likely examine where the blame lies for the detachment. It is possible the driver could be faulted, or workers at the mill from where he had just departed. It’s also possible the owner of the truck could be held responsible if it’s shown the issue was a failure to maintain or inspect.

Civil liability may come down to the contracts that were arranged between the companies and the driver. Often, firms will only hire independent truckers for the very purpose of attempting to evade liability in a Florida truck accident.

However, Florida has strong precedence with regard to vicarious liability of vehicle owners, so that entity may be responsible, regardless of the employment contract. Additionally, federally-licensed motor carriers are required to carry a minimum level of insurance.

Our experienced injury lawyers know well how trucking companies work to minimize liability. Families seeking justice and compensation in these situations must consult with a respected legal team as soon as possible.