In a fiery overnight Cape Coral car crash recently, one man lost his life while a female passenger suffered severe burns in a wreck off Rose Garden Road. 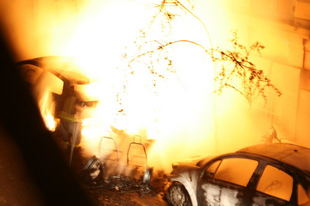 Our Cape Coral car accident lawyers understand the driver died after becoming trapped in the vehicle, while the passenger, from Lehigh Acres, suffered potentially life-threatening burns to more than 65 percent of her body.

Firefighters were able to extinguish the blaze within several minutes of arrival. But authorities said it may still be several weeks before they are able to definitively identify the deceased driver. Investigators believe the driver lost control of the vehicle while attempting to negotiate a curve, causing the car to spin into the median and strike a tree, before bursting into flames. We don’t know at this point whether drugs or alcohol were involved.

Burn injuries sustained in motor vehicle accidents are often some of the most severe, and treatment is typically complicated by the fact that the victim may have other injuries as well. Even basic fractures are known to especially complicate burn wound care unless a person is surgically stabilized.

What’s more, recent research published in the December 2011 issue of the Journal of Experimental Medicine revealed that traumatic personal injuries and major burns cause something called a “genomic storm” in human immune cells. Essentially, trauma of this nature cases your immune system to take a major hit, making it tougher for you to fight off infections – which are common following burn injuries. It may also result in a far slower recovery time than you might have otherwise endured.

Burn injury victims may also suffer more emotionally than other car accident victims. A car accident is traumatic. This can be amplified by the fact that painful and disfiguring scars can serve as a permanent reminder.

Skin grafting surgeries may help to minimize the scars, but these often must take place over long periods of time and the procedures can be extremely painful.

The extent of one’s treatment is going to depend on the type of burn injury he or she sustained. A first-degree burn, which is the least serious, is one in which only the outer layer of skin is burned. The skin is red and swollen but pain usually quickly subsides and medical treatment is not usually necessary unless it covers a large area.

A second-degree burn is one in which the skin has been burned through the second layer, or dermis, causing blisters, severe swelling and pain and bright red splotches.

A third-degree burn is one in which all lawyers of the skin are affected and there may be permanent tissue damage. Fat, muscle and even bones may be affected, with areas of tissue charred black or even white. This is the kind we most often see accompanying motor vehicle accident victims when there is a fire involved.