All motorists are held to the same duty of care standard when operating a vehicle, and that is the duty of reasonable care. That means acting the same a reasonably prudent driver would under the same or similar circumstances. 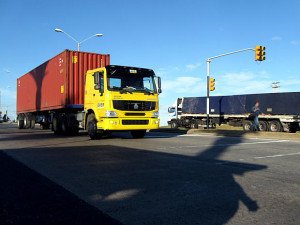 Semi-truck drivers are no different. However, there are in many ways held to a higher standard than others for several reasons. The Federal Motor Carrier Safety Administration requires truck drivers and truck companies to adhere to certain drive-time limits, weight restrictions and training requirements in order to be road-worthy. That training involves teaching truckers to use extra care, remain alert and operate at a safe speed.

In the recent case of Dakter v. Cavallino, before the Wisconsin Supreme Court, the question was whether jurors wrongly held the trucker had a higher standard of care when they were asked to weigh if he’d acted as a reasonably prudent truck driver would under similar circumstances. The state supreme court held that it did not, and affirmed the $1.1 million verdict in favor of injured plaintiff and his wife.

It was heavily disputed what happened next, but we know the two entered the intersection simultaneously and collided, resulting in serious injury to plaintiff.

Plaintiff then sued the driver. Prior to trial, both sides agreed that the ordinary standard of care applies to every driver. However, they disagreed about whether jurors should hear expert witness testimony regarding the special knowledge and skill possessed by drivers of semi-trucks – especially when, as in this case, the driver has more than 30 years of experience.

Trial court agreed ordinary standard of care was applicable, but noted that when it comes to semi-trailer truck drivers, a standard of ordinary care means the care a reasonable and prudent truck driver would use under similar circumstances. With this in mind, trial court allowed plaintiff’s expert witness testimony regarding truck drivers’ special knowledge and skill to be presented.

Expert witness testified to a number of points, but these two in particular were of key importance:

Expert witness testified trucker was traveling too fast for conditions, and thus was responsible for the crash.

Jurors weighed this and other evidence over the course of 10 days and ultimately held trucker 65 percent responsible for the crash, and plaintiff comparatively 35 percent at-fault.

Defendant later appealed, saying that allowing the expert witness to testify and allowing the jury to consider his skill and knowledge as a trucker meant that he was held to a higher duty of care standard than he should have been.

The court rejected this argument and affirmed the verdict.