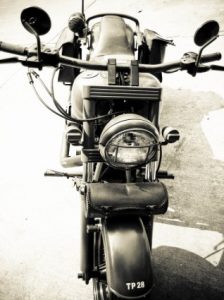 Back in 2004, she received an 80-hour suspension for a dispute that involved another driver.

According to the motorcyclist and his father, who have consulted with an injury lawyer and say they intend to file a personal injury lawsuit, say management with the city should have known that based on the driver’s record, she was unfit to operate a large public bus. At no point was the driver reportedly given additional training or reassigned to a desk position.

The motorcyclist, meanwhile, has amassed more than $250,000 in medical bills – and his expenses continue to grow. He suffered a broken right arm and a broken right leg. He had to undergo surgery to have steel rods placed in his body. The range of motion and strength in his arm and leg have been forever altered, and he has lost the ability to run and jump. The loss of wages issue in this case may be a substantial one too. We’re talking about a young man just starting out in his life who is now severely limited in the kind of work he’ll be able to do in the future.

The fact the bus driver stayed on the job after so many incidents is unacceptable. However, it’s not all that uncommon, unfortunately. Our motorcycle accident and bus accident attorneys are aware of numerous cases in which bus drivers with a history of reckless actions stayed on-the-job. In fact, The Sun-Sentinel has written about this problem extensively on the east coast of Florida. For example, one Broward County Transit driver was still working after 16 accidents and 25 written warnings, starting his first week on the job in 1994. He’s set to retire in 2020.

Recently in Miami-Dade, a Miami-Dade transit bus reportedly collided with a 31-year-old man on a motorized bike, killing him. Authorities have not yet released the cause of that motorcycle vs. bus accident.

There is no data on how often buses collide with motorcycles, though we do know that bus drivers tend to have larger blind spots and therefore would be less likely to see a motorcyclist (particularly if they weren’t being cautious) than other drivers.