A Fort Myers bicyclist’s successful challenge of a ticket for failing to adhere to the right side of the road went national, after a story in The News-Press was picked up by USA Today, likely in recognition of the fact that an increasing number of cyclists are trying to protect themselves by riding in the center of a lane. 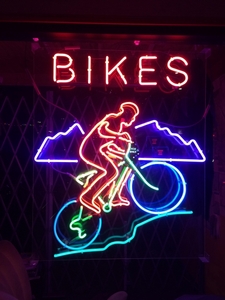 They do have the right to do so, though many motorists and even police officers – as this case reveals – don’t appreciate the practice. Florida law requires bicyclists to ride either in a marked bicycle lane or, if their is none, as close as practicable to the right-hand curb or edge of the roadway.

FS. 316.2065 allows for exceptions when it’s reasonably necessary to avoid a condition or potential conflict that might make it unsafe to do so. That includes in situations where the lane is of a substandard width – that is, where the lane is too narrow for the cyclist and the other vehicle to travel safely side-by-side. In these instances, cyclists are allowed to take up the entire lane.

The argument made by the cyclist in this case was based on several key points.

First, the law requires motorists to maintain at least three feet of space between themselves and cyclists at all times. Cyclists need at least three feet on either side – including from the edge of the curb – to keep them safe. A standard-sized lane is about 14 feet. The lane in this case was 13.5 feet. Cyclist argued that while a passenger vehicle might be able to safely navigate around him in this instance, were he to ride to the right, larger trucks and commercial vehicles could not. Because it was a busy road with all types of vehicles traveling, cyclist felt it prudent to take up the full lane.

He was ticketed, according to a Lee County Sheriff’s deputy, for failing to ride to the right of the curb, and for impeding the flow of traffic. The deputy asserted at the hearing the cyclist was endangering others on the road by this action because other vehicles had to slow down significantly, almost to a stop.

But the portion of the law that addresses impeding the flow of traffic pertains only to motor vehicles, the hearing officer pointed out – not cyclists.

The hearings officer, after spending more than two hours weighing the evidence and testimony, determined the cyclist’s potential for being clipped or struck by moving objects meant that it was most safe for him to ride in the middle of the lane. Therefore,the ticket was dismissed.

This saved the rider the expense of a $65 ticket. Most would have simply paid it and moved on. However, for this rider, it was more about making a point, and ultimately, making the roads safer for other cyclists.

The National Highway Traffic Safety Association reports Florida has the highest rate of bicyclist fatalities in the country. There were 122 reported bicyclist deaths in 2013, the latest year for which figures are available.