The Fort Myers motorcycle accident attorneys at Associates and Bruce L. Scheiner, Attorneys for the Injured, are taking a comprehensive look at motorcycle safety as we head into the the heart of Spring Break and the summer riding season.

We’d like to discuss some of the previous years’ statistics and trends to help motorists get an idea of the scope of the issue. Awareness is one of the first steps toward correcting a very dangerous situation. 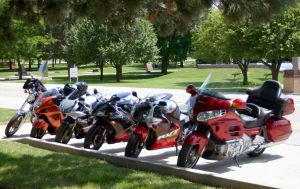 According to Ride Smart Florida, there were nearly 8,315 motorcycle crashes in the state of Florida in 2009. Every year, from 1997 to 2008, our state saw an increase in the number of motorcycle accidents, fatalities and injuries in Fort Myers and elsewhere.

As our state’s population continues to grow and more and more people make the Sunshine State their vacation destination, motorcycle enthusiasts continue to push motorcycle safety as a top issue, and rightfully so. Every year, far too many motorcyclists are killed in our state. Florida is one of the most dangerous states in the country for these kinds of accidents, year after year.

Some aren’t even crediting anyone’s driving skills to the recent, and quick, reduction. Some are saying that the implementation of Florida’s Motorcycle Safety Coalition and the new rider training requirements that were put into place back in 2008, have helped contribute to the decrease. Doubts are expressed across the board about a continuation of this downward trend.

So who’s at risk? It’s obvious that motorcyclists are at higher risks for injuries and fatalities in the event of a motor vehicle accident. But do you know who is more likely to be involved in a serious wreck? According to statistics, motorcyclists between the age of 45- and 54 years-old were involved in the most motorcycle accidents in 2009 — more than any other age group of riders. Coming in at number two was the 25- to 34-years-old age group. The median off all of the riders who were killed in 2009 motorcycle accidents was 42-years-old.

Associates and Bruce L. Scheiner, Attorneys for the Injured, has spent 40 years fighting for the rights of motorcycle riders throughout the South Florida area, including Fort Myers, Cape Coral, Bonita Springs, Naples, Port Charlotte, Sebring and elsewhere. If you or someone who is close to you has been involved in a motorcycle accident in Southwest Florida, call today to set up a free and confidential appointment to discuss your case. 1-800-283-2900.