Teen drivers recently met at our Nation’s Capital to focus on the importance of safe driving habits during the summer months, especially when sharing our roadways with large trucks. Teens were involved in an interactive event to discuss the risks and consequences of a serious car accident in Fort Myers and elsewhere this summer. Each teen pledged to avoid the blind spots of large trucks and signed a “No Texting Promise” during this truck safety demonstration. 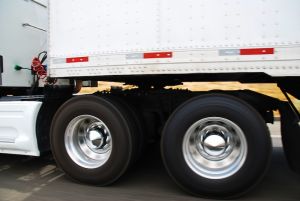 This demonstrations was conducted by the U.S. Department of Transportation’s Federal Motor Carrier Safety Administration (FMCSA), the National Organizations for Youth Safety (NOYS) and the Commercial Vehicle Safety Alliance (CVSA). Officials from each organization spoke with these teens about the dangers of large trucks. For example, a fully loaded tractor-trailer requires approximately twice the stopping distance as a passenger vehicle. They also discussed their “No Zones,” or blind spots.

Our Cape Coral personal injury attorneys understand that most of our young drivers do not have enough driving experience or driving knowledge to fully understand how these larger vehicles operate. They also lack the knowledge of how to properly and effectively accommodate their travel on our roadways. For these reasons, it is important to speak with our newly licensed drivers to make sure they understand the risks and consequences of accidents that involve such large vehicles. With proper knowledge, skill and experience, a serious — or fatal — accident may be prevented.

“We want everyone to be safe, but as newer drivers, teens must adhere to a few simple rules,” said Anne Ferro, Administrator of the Federal Motor Carrier Safety Administration. “They are: buckle up, don’t drink and drive; don’t speed, don’t text or use your phone, and steer clear of a truck’s blind spots.”

“Prom, graduation, and summer are fantastic times for youth to celebrate and enjoy. However, with these fun times come unfortunate tragedies,” said Sandy Spavone, President of the National Organizations for Youth Safety (NOYS). “Through education, enforcement, and legislation lives can be saved and injuries prevented.”

Individuals aged 16- to 24-years-old make up the age group that has the highest traffic accident death rate in the United States. Between the years of 2005 and 2009, approximately 4,000 people from this age group were killed in traffic accidents that reportedly involved a large truck.

“Do not expect that having a driver’s license is a right that comes without responsibility or risk,” said Steve Keppler, Executive Director of the Commercial Vehicle Safety Alliance (CVSA). “Be accountable for your actions, spread the word to your friends and parents, and help create a culture of safety. Most importantly, take the driving task seriously. You never know the impact you can have that ultimately could save your life or someone else’s.”

If you or someone you love has been seriously injured or killed in an accident, there are certain things you can do to help protect your rights. The wrongful death, injury and accident attorneys at Associates and Bruce L. Scheiner, Attorneys for the Injured, have been representing victims of car accidents, truck accident, motorcycle accidents and bicycle and pedestrian accidents since 1971. The firm offers free appointments to discuss your rights at any of its offices located throughout Southwest Florida, including Fort Myers, Cape Coral, Naples, Arcadia, Port Charlotte, Sebring and Venice.