Just last month, a 59-year-old woman was driving Old 41 in North Fort Myers around 2 p.m. when she was struck head-on by a 63-year-old woman driving south in the northbound lane. Both women were rushed to the hospital. The at-fault driver lived. The other lost her life. 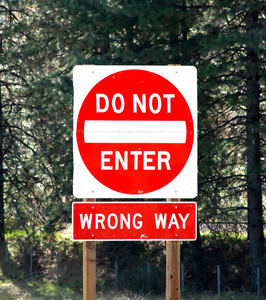 It’s not yet clear whether alcohol was a factor in the crash, but we do know many wrong-way crashes in Florida are predicated by alcohol consumption.

The Florida Highway Patrol reports there were 164 people killed in wrong-way crashes in the state between 2003 and 2012. Another 1,322 were seriously injured. According to research by traffic engineers at the University of Central Florida, each fatal crash costs an average of $6.6 million when you factor in medical bills, emergency response services, property damage, lost wages, loss of productivity and other factors. Wrong-way crashes involving injuries, meanwhile, cost an average of nearly $640,000 each, according to that same study.

This month, Mothers Against Drunk Driving announced it will team up with local law enforcement agencies as well as the Florida Department of Law Enforcement in an effort to halt one-way drivers. That the initiative is underway in December is no mere coincidence. The last month of the year has one of the highest rates of drunk driving fatalities of the year. It’s also National Impaired Driving Prevention Month.

The wrong-way crash reduction effort involves local law enforcement polling arrested drunk drivers on where they had their last drink. That information is entered into a database, and then used to conduct outreach and education to those establishments, hoping to train staffers on how to better detect when a person is too heavily intoxicated to continue drinking and avoid “over-serving” – a key risk factor in wrong-way crashes.

These bars have a vested interest in participating, considering they may potentially face liability under Florida’s dram shop laws if they serve a minor or person habitually addicted to alcohol.

Another outreach effort involves seeking an open dialogue with local colleges, given many wrong-way drivers tend to skew younger (the recent North Fort Myers case notwithstanding).

In Tampa last February, four fraternity brothers from the University of South Florida were killed when a wrong-way driver struck them on Interstate 275.

In some areas – including Miami-Dade and Volusia County — traffic engineers have initiated programs to install beefed up “Wrong-Way” signs at certain highway entrance ramps. These signs display bigger lettering, flashing lights and even come equipped with radar detection that will alert authorities immediately if a motorists proceeds through in the wrong direction despite the warning.

No such plans are currently under way in Lee County or Charlotte County, but we do hope local authorities will consider the success of such actions in other regions and weigh the cost of a sign versus the enormous human toll we incur with each one of these devastating crashes.