Cape Coral drivers would do well to avoid Santa Barbara Boulevard and Cape Coral Parkway. Both the intersection and the roads themselves.

As part of an ongoing series on Cape Coral traffic, The News-Press looked at the city’s most dangerous traffic hotspots. Heavy traffic was the common denominator. Each of the six most dangerous intersections handled between 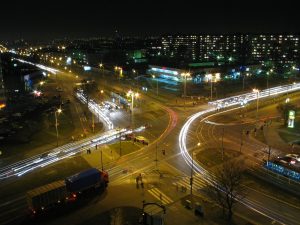 Veterans Memorial Parkway and Santa Barbara Boulevard: In 2017, this was the most heavily congested intersection in the city; 41 traffic collisions were reported. More than 50,000 vehicles traveled through the intersection during both the morning and evening commute. The News-Press noted that equated to 100,000 vehicles a day, or more than half Cape Coral’s total population of 189,000.

Coronado Parkway and Cape Coral Parkway: 36 collisions were reported last year. Proximity to big box stores and other businesses, as well as inadequate turn lanes and confusing intersection design were cited as reasons for the dangers.

Andalusia Boulevard and Pine Island Road and Barbara and Pine Island Road: Tied for third most-dangerous with 30 collisions each. Presence of fast-food stores and auto dealerships, combined with inadequate turn lanes, signage and traffic-control devices were noted by The News-Press.

Country Club Boulevard and Veterans Parkway: The second appearance of Veterans Parkway on the list, this location reported 26 crashes last year, amid traffic of nearly 100,000 vehicles a day. When you consider Veterans Parkway is a modern, high-traffic artery feeding into many of these older, antiquated side roads, it’s little wonder why it’s the site of so many collisions.

City engineers have begun a study of 68 intersection, while many residents and property owners report they have been urging for years that changes be made to some of the city’s most dangerous intersections.

Our car accident lawyers in Cape Coral and Fort Myers know the area’s explosive growth is a primary factor when it comes to road risks. The city’s population has nearly doubled since 2000. Just over 10,000 residents lived there in 1971, the year Bruce L. Scheiner founded Associates and Bruce L. Scheiner, Attorneys for the Injured.

Even the effort to modernize is creating risks.  Wink News reported recently about the dangers of drivers speeding through road construction and utility projects. In some cases, a city, county or other government entity may share liability when dangerous conditions contribute to a serious or fatal traffic collision. In other cases, conditions are dangerous because the confluence of traffic brings too many dangerous and inattentive motorists together at the same time. Consulting a law firm with experience in handling collisions involving dangerous intersections or roadways can best determine victims’ rights based on the individual facts and circumstances of the case.